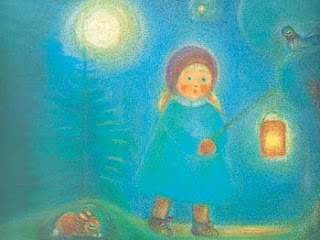 Saint Martin, the soldier who became bishop
Martin was a native of Pannonia -- in modern-day Hungary -- and his father was very anxious that he should go into the Army. This was in the days of the Roman Empire, and to be an officer in the Imperial Army was a very fine opportunity for any young man.
As a junior officer, he was sent to Gaul -- that wild land of northwest Europe inhabited by the mostly pagan Frankish people. There were some Christian cities where bishops were established and a Christian civilization was beginning to emerge.
Martin was interested in Christianity and tried to find out about it. Its message attracted him, and he started to obey some of its precepts. He earned himself some notoriety by refusing to join in some of the bawdier songs and more outlandish activities of military life. He gave freely to the poor, was kind to his servants, and liked to pray. But he postponed the actual step of Christian baptism.
His first posting was to Rheims, and from there he was sent to Amiens. One bitterly cold night, as he was striding along in uniform, a shivering beggar cried out to him for alms. Martin was warmly dressed in the standard-issue thick purple-and-white cloak that was the hallmark of the Imperial officer. Looking at the beggar, Martin knew what he ought to do. He took off his warm cloak and, using his gleaming sword, sliced it in two. He gave half to the beggar and retained the other half so that he would still be in regulation uniform.
The night, the beggar appeared to Martin in a dream: but as a figure surrounded with shining glory -- Christ Himself, still wearing the half of Martin's cloak. Our Lord reminded Martin of His words in the Gospel: "I was naked and you clothed me ... in as much as you did it to the least of the little ones, you did it to Me".
Martin got himself baptized as a Christian, and when his term of duty was up, he left the army and decided to become a priest. He lived for many years the life of a hermit, and, attracting others to the rule of prayer and meditation that he followed, founded a small monastic community that grew steadily.
In due course, Martin's holiness led him to be chosen as Bishop of Tours, although he didn't want the job. As Bishop, his influence was immense -- he won many from the Druid religion to Christianity, and was a central figure in laying the foundations of Christian France.


Matthew 25:31-40:
When the Son of man shall come in his glory, and all the holy angels with him, then shall he sit upon the throne of his glory:
And before him shall be gathered all nations: and he shall separate them one from another, as a shepherd divideth his sheep from the goats:
And he shall set the sheep on his right hand, but the goats on the left.
Then shall the King say unto them on his right hand, Come, ye blessed of my Father, inherit the kingdom prepared for you from the foundation of the world:
For I was an hungred, and ye gave me meat: I was thirsty, and ye gave me drink: I was a stranger, and ye took me in:
Naked, and ye clothed me: I was sick, and ye visited me: I was in prison, and ye came unto me.
Then shall the righteous answer him, saying, Lord, when saw we thee an hungred, and fed thee? or thirsty, and gave thee drink?
When saw we thee a stranger, and took thee in? or naked, and clothed thee?
Or when saw we thee sick, or in prison, and came unto thee?
And the King shall answer and say unto them, Verily I say unto you, Inasmuch as ye have done it unto one of the least of these my brethren, ye have done it unto me.


In former times, especially in the North of England & in Scotland, Martinmas was an occasion for a great feast, because it was the date when beasts were slaughtered so that the meat could be stored for the long winter months ahead. Whole oxen would be roasted & enjoyed & there was much communal merriment.
"Martinmas is an obvious day for some act of charity which will benefit the cold and poor this coming winter."

Some nice things to do for Martinmas:

Start a family collection for charity.
Begin knitting something warm for someone who needs it.
Bag up clothing to give to the needy.
Change your beds from cotton to flannel.
Surprise your children with new winter pajamas.
Read aloud or re-tell the story of Saint Martin of Tours.
Make lanterns from watercolour paintings & oil, or glass jars & tissue paper...
Invite friends on a lantern walk at dusk.
Enjoy a special supper for Martinmas with a hot casserole of beef to commemorate the old feasting traditions, served with jacket potatoes & butter.

Although St. Martin's life was austere and sober, his day was always celebrated in the Old World manner, with feasting, merriment, and thanksgiving for harvest foods. In Poland rich cookies shaped like horseshoes were baked for St. Martin's snow-white horse, on which he "comes riding through the snow" when one least expects him.

DIRECTIONS
Cream butter or margarine; add sugar gradually while continuing to cream; beat until fluffy. Stir in vanilla, flour, and salt. Blend in rolled oats. Roll out about 1/4 inch thick on lightly floured board. Cut in strips 6 inches long and 1/2 inch wide. On ungreased cookie sheets shape strips to resemble horseshoes. Bake at 325° for 20 to 15 minutes or until lightly browned. Remove carefully, as cookies are very rich and break easily.
Posted by Lynn at 07:59

Lynn, Thank you for this wonderful post as I prepare to celebrate Martinmas. Lots of ideas and inspiration. Blessings, Jane

Lovely post, Lynn! We also are going to have to try the horseshoe cookies as my mom is 100% Polish :D As always, your presentation is wonderful and I come away with new information. You're a natural born teacher!

Lovely list of things to do :o) I thought you could only do the oil lantern thing with wax crayon pictures - does it work well with watercolour paintings too?

you must to let me know how you get on with the cookies, Jen!
thank you for your encouraging comments : )

Hannah - we have always used watercolours - they come out beautifuly when enhanced by the oil
see my new post : )