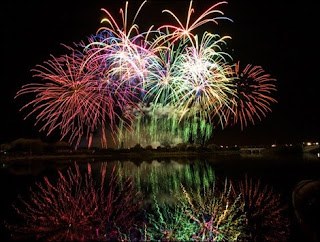 After Queen Elizabeth I died in 1603, English Catholics who had been persecuted under her rule had hoped that her successor, James I, would be more tolerant of their religion. James I had, after all, had a Catholic mother. Unfortunately, James did not turn out to be more tolerant than Elizabeth and a number of young men, 13 to be exact, decided that violent action was the answer.A small group took shape, under the leadership of Robert Catesby. Catesby felt that violent action was warranted. Indeed, the thing to do was to blow up the Houses of Parliament. In doing so, they would kill the King, maybe even the Prince of Wales, and the Members of Parliament who were making life difficult for the Catholics. To carry out their plan, the conspirators got hold of 36 barrels of gunpowder - and stored them in a cellar, just under the House of Lords. Guy Fawkes was given the job to keep watch over the barrels of gunpowder & to light the fuse. On the morning of November 5th 1605, soldiers discovered Guy hidden in the cellar & arrested him. The trail of gunpowder would never be lit.On the very night that the Gunpowder Plot was foiled, bonfires were set alight to celebrate the safety of the King. Since then, November 5th has become known as Bonfire night. The event is commemorated every year with fireworks and burning effigies of Guy Fawkes on a bonfire.

Place the butter, water and vinegar into a heavy bottomed saucepan, heat gently until the butter has melted.  Add the sugar and black treacle, allow to fully dissolve, this takes about 20 minutes.  Boil the mixture to a temperature of 138°C (280°F).  Remove from the heat, allow the bubble to decrease.  Pour the mixture into a well oiled 18cm (7 inch) sandwich tin.  When the mixture has cooled a little mark the surface into squares with a knife.  When cold break into squares, wrap in cellophane and store in an airtight container.

1. Dissolve the sugar in the water over a moderate heat. When it has dissolved, stir in the vinegar, syrup and butter. Bring to a boil and cook without stirring until it reaches hard-crack stage (138C) or hardens into a ball when dropped in a jug of cold water. This should take around 10 minutes boiling time.
2. While the syrup is cooking, pierce each apple with a wooden stick. Once the toffee is ready, dip each apple into the hot toffee, turning it around in the syrup so that each one is fully coated.
3. Leave to harden on a lightly oiled tray before serving. If you're planning to keep them for a day or two, wrap the apples in cellophane.

Guy Fawkes, guy, t'was his intent
To blow up king and parliament.
Three score barrels were laid below
To prove old England's overthrow.

I just started following your blog from the yahoo group. So far you remind me of the Martha Stewart of Waldorf, lol with all those delicious recipes. It reminds me of how much I need to do practice at these things as I'm so very poor at baking and food prep.

Btw-is Guy Fawkes Night even practicied in the U.S? I've never heard of it before. Sounds like fun though.

LOL! Amy!
Not quite Martha Stewart - I used a new toffee recipe today & had to make it 3 times to get it right ; )
Guy Fawkes Night is an English festival. I have heard of Americans who visit England & keep the tradition.
LX

Dear Lynn, I just have to take a moment and say how lovely and inspiring your blog is! I found you several months ago on the yahoo group and have so enjoyed your blog. We celebrate Guy Fawkes even though we are native Arizonans. Don't ask me why, lol! I read about it in All Year Round about 10 yrs ago and for some reason we all jumped on it! Any excuse for a bonfire I guess!

Anyway, thanks for providing so much inspiration!

Beth, thank you for such an encouraging comment.
What a great thing to celebrate Guy Fawkes Night!
All year round really is a great book : )
LX