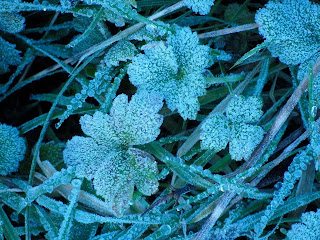 The beginning of winter in the Northern Hemisphere
The winter solstice marks the shortest day and the longest night of the year. The sun appears at its lowest point in the sky, therefore it crosses the sky in the quickest time which makes this the shortest day of the year. Its noontime elevation appears to be the same for several days before and after the solstice, hence the origin of the word solstice; which comes from Latin solstitium, from sol, "sun" and -stitium, "a stoppage." Following the winter solstice, the days begin to grow longer and the nights shorter.
Sunshine makes the seasons
You can see the reason for these changes using a globe for the earth & a torch for the sun.
Put a sticker on the place where you live on the globe. Turn the globe so that the north pole is tilted away from the torch. Turn the globe all the way around & you will see that the sticker is in the light only a short time.The northern half of the earth has short days & long nights. Sunlight does not fall on the north pole. The north pole has its long winter night. It is winter & it is cold.
Keep the globe tilted in the same direction & go partway around the torch. Now the light falls on both polls. It is springtime in the north. Days are getting longer. Without changing the direction of the globe, move until you are halfway around the torch from where you started. Soon the North Pole will be tilted toward the light. It is summer. As you spin the globe, the sticker is in the light longer than it is in the dark. The northern half of the earth has long days & short nights. The North Pole has its long summer day. It is summer & it is warm. Keep moving around the torch. Remember, keep the axis of the globe pointing in the same direction. You’ll see that once again light falls on both the North pole & the South Pole of the globe. It is autumn in the north. The days are getting shorter & cooler too. Keep moving until you come back to winter.

A song to sing:
Down with darkness, up with light,
Up with sunshine, down with night,
Each of us is one small light.
But together we shine bright.

Go away darkest, blackest night.
Go away, give way to light.

In the woodlands or garden, lay out a path, spiraling inwards. Moss & greenery can edge the path & a tall candle in the centre of the spiral. Beautiful stones & rocks can be set in the greenery & stars of gold card line the pathway.

The celebration can begin with a reading of John 8:12
Then spake Jesus again unto them, saying, I am the light of the world: he that followeth me shall not walk in darkness, but shall have the light of life.

Carol singing follows. During the singing, each child approaches the entrance of the spiral path to receive a white candle (or tealight) in a shiny red apple, which they carry toward the centre of the spiral. (Little ones shepherded by a parent or older child) From the centre candle, they take light for their own candle & then proceede outwards, very carefuly until they find a gold star on which to place their own apple & candle.
When all the children have walked the path, serve solstice fairy cakes(see below), star sugar cookies & warm pear juice, or mulled apple jiuce. They may keep their apple candle to relight & re-kindle the memories of a special walk.

We ice half a batch of fairy cakes with white chocolate & half with milk chocolate: white representing the (returning) light and milk symbolizing the (retreating) dark.
Posted by Lynn at 00:33

What a neat idea with the globe to explain the solstice. I will have to try that to show the girls! Have fun with your fairy goodies :D