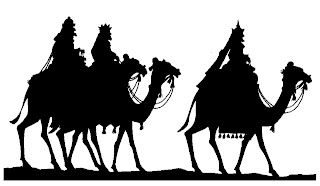 Now when Jesus was born in Bethlehem of Judaea in the days of Herod the king, behold, there came wise men from the east to Jerusalem, Saying, Where is he that is born King of the Jews? for we have seen his star in the east, and are come to worship him.
When Herod the king had heard these things, he was troubled, and all Jerusalem with him.
And when he had gathered all the chief priests and scribes of the people together, he demanded of them where Christ should be born.
And they said unto him, In Bethlehem of Judaea: for thus it is written by the prophet,
And thou Bethlehem, in the land of Juda, art not the least among the princes of Juda: for out of thee shall come a Governor, that shall rule my people Israel.
Then Herod, when he had privily called the wise men, enquired of them diligently what time the star appeared.
And he sent them to Bethlehem, and said, Go and search diligently for the young child; and when ye have found him, bring me word again, that I may come and worship him also.
When they had heard the king, they departed; and, lo, the star, which they saw in the east, went before them, till it came and stood over where the young child was.
When they saw the star, they rejoiced with exceeding great joy.
And when they were come into the house, they saw the young child with Mary his mother, and fell down, and worshipped him: and when they had opened their treasures, they presented unto him gifts; gold, and frankincense and myrrh.
And being warned of God in a dream that they should not return to Herod, they departed into their own country another way.

Some ways we will celebrate Epiphany:

Add the kings to the scene in our nativity.

A verse to say together:

Three kings come riding to follow a star, over mountain & valley & crag.
They travel along to a country far, three gifts they have in their bag:
Gold for a king as merry we sing,
And incense to burn in the fire,
And myrrh for his parting in sorrow we sigh,
And the little child bids them come nigh.

Read The Story of Babushka

Make crowns from sugar paper & glitter
Posted by Lynn at 02:46

Thanks for sharing your ideas Lynn, We strive to live out the liturgical year too and it is great to see other's ideas! Thanks for your comment on my blog - too true - it always begins with the momma!
Blessings in Christ
Shirley
PS. We are moving to Scotland in August 2010! Going from Sunshine to snow - brrrr!!!

How fun, Lynn! I love your plans and the cake sounds amazing. Also, the Babuska story is very similar to Befana ~ how magical :D Wish I could fly over there and celebrate with your family.
Hugs,
Jen

I love the Babushka story too, as we don't pretend Father Christmas is real to our children it is lovely to indulge in imaginative storytelling about gifts and why they are given, especially when it brings us back to Jesus!

We will be moving to Drumnadrochit (gosh, did I spell that right?) That is the plan anyway - close enough to travel into Inverness if we really have to for work, but praying that God will undertake for us in the Country!

Your celebration sounds lovely..we, too bake a cake and it is always fun to see who will get the bean! I love the babushka story..Have a wonderful day!