Preparing for The Harvest Moon 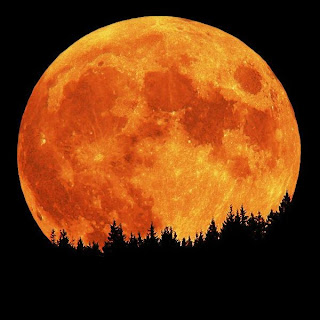 
Thank you to Jane: Yes, Harvest moon is *next* month this year! My Susan Branch Calendar has it as being September, but it is in fact October! Thank you For pointing this out :)

Here is how we enjoy The Harvest Moon in our home:

We talk about the science:

All full moons rise around the time of sunset. However, although in general the moon rises about 50 minutes later each day, as it moves in orbit around Earth, the Harvest Moon and Hunter's Moon are special, because around the time of these full moons, the time difference between moonrise on successive evenings is shorter than usual. In other words, the moon rises approximately 30 minutes later, from one night to the next, for several evenings around the full Hunter's or Harvest Moons. Thus there is no long period of darkness between sunset and moonrise around the time following these full moons. In times past this feature of these autumn moons was said to help farmers working to bring in their crops (or, in the case of the Hunter's Moon, hunters tracking their prey). They could continue being productive by moonlight even after the sun had set. Hence the name Harvest (or Hunter's) Moon.
The Harvest Moon is said to come before or after the autumnal equinox. It is simply the full moon closest to that equinox. About once every four years it occurs in October, depending on the cycles of the moon.
Often, the Harvest Moon seems to be bigger or brighter or more colorful than other moons. These effects have to do with the seasonal tilt of the earth. The warm color of the moon shortly after it rises is an optical illusion, based on the fact that the moon low in the sky, you are looking at it through a greater amount of atmospheric particles than than when the moon is overhead. The atmosphere scatters the bluish component of moonlight (which is really reflected white light from the sun), but allows the reddish component of the light to travel a straighter path to your eyes. Hence all moons (and stars and planets) look reddish when they are low in the sky.
As for the large size of a full moon when seen low in the sky, it is true that the human eye perceives a low-hanging moon to be larger than one that's high in the sky.
Harvest festivals are traditionally held on or near the Sunday of the Harvest Moon. This is the full Moon that occurs closest to the autumn equinox (about Sept. 23). In two years out of three, the Harvest Moon comes in September, but in some years it occurs in October.

We think about our God who created the heavens & the earth:

Mold in your hands beeswax harvest moons whilst listening to the story.

Grease and flour a 10-inch Bundt pan or tube pan. In a large mixing bowl, mix the eggs with a large fork until well blended. Mix in the sugar. Add the oil in a steady stream, mixing all the while, until the mixture is thick and smooth. Mix in the pumpkin, vanilla, cinnamon, clove and salt. Add the baking soda and baking powder in pinches, breaking up any lumps with your fingers. Stir in thoroughly. Stir in the whole wheat and all-purpose flours just until blended. Stir in the walnuts.
Pour and scrape the batter into the pan and bake for 45 to 50 minutes, or until a tester inserted in the center comes out clean. Cool in the pan on a rack for 10 minutes. Invert, remove the pan, and cool on the rack for about 15 minutes more.
Posted by Lynn at 10:54

Wonderful post. I thought the full moon tomorrow night was the corn moon, am I wrong? Isn't the harvest moon in October this year?

Such a happy blog. Lots of lovely posts to enjoy reading. Best wishes to you all!

We made your Pumpkin Moonshine Cake today. It was delicious! Thanks!